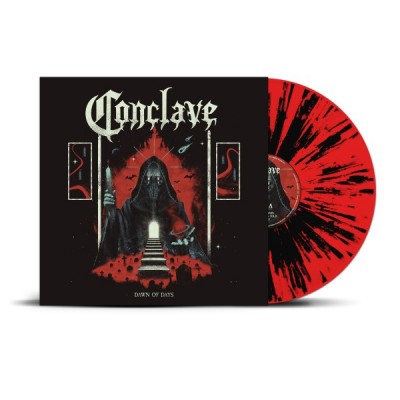 Heavy Doomsters Conclave are about to release the follow up to their 2016 debut album Sins Of The Elders and the Massachusetts based band have not stopped working since that album.

Chris Giguere has joined the band on lead and rhythm guitar allowing the sound and style of writing to evolve, retaining the crushing Doom core but allowing some of the fringe outputs to be furthered. The band have used the uncertainty, depressive and angry emotions that flowed through 2020 to create the 5 tracks on this album, so strap yourself in and be prepared for some shattering heaviness.

As the opening track begins, you may be drawn into a false sense of security, as the steady and atmospheric music whisks us away nicely, before spiralling and crashing heavily as the Doom really begins. You can feel the power that is being expressed already with down-tuned guitars, heavy chugs and shattering drums as the backdrop for the gravely vocal, you know you are going to be in for some serious intensity.

Even with stunning guitar solos that weave their way around the slabs of riff that are hurtling your way, the might of the sound is so much that you feel bogged down, struggling to move. Then the reality that you are only on track 1 hits.

The 5 tracks span 46 minutes, so you need to know that you are going to feel like you have been on a serious workout by the end, carrying the enormity that Conclave manage to express through their music. However, as per any work out, this feels so good and the endorphins that will be flying around your body will make you realise that this is really good for you.

As the album progresses, the Doom gets darker and dingier as the riffs become deeper and thicker, yet you find yourself in this uncompromising delight never wanting to leave. Let’s be honest, 2020 was wank for pretty much everyone, so this musical expression is the reflection of what many of us are feeling around the year that was.

Dawn of Days is a no nonsense and uncompromising Doom album that is more than your average, heavier than the norm and better than the majority. It should really push Conclave to the forefront of the Doom world and needs to be heard to be appreciated just how good it is.