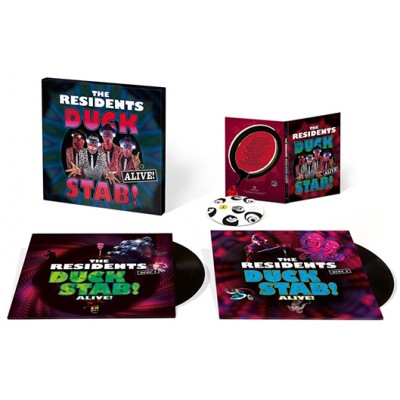 The Residents released DUCK STAB! as a seven inch, 33 1/3 rpm EP in 1978. For the group, the relatively lighthearted EP represented a break from the much more experimental “Eskimo” recordings, which consumed the majority of a four-year period from 1975-79; for Ralph Records it was a much-needed revenue source at a time when the band was not producing much product. To everyone’s surprise, the EP was a hit, selling 50,000 copies in a few months. The demand was so high, that Ralph insisted the band record a second EP, Buster & Glen, which they paired with DUCK STAB! to make an LP, which was also quite successful.

Several years later, Night Flight, a program featuring alternative programming on the USA cable channel, aired Residents’ video, including the Hello Skinny music video based on a song from the DUCK STAB! / Buster & Glen album. The program aired from 1981-88 often highlighting The Residents to the extent that many of the group’s fans cited Night Flight as their initial intro- duction to the band.

Fast forwarding to 2016 when Night Flight resurrected itself as a streaming video service, Night Flight Plus. In recognition of their long-standing connection, Night Flight invited The Residents to create a program in celebration of the service’s 40th Anniversary on June 5, 2021. Since the band was already rehearsing DUCK STAB! as part of their upcoming 50th Anniversary Tour, the forty-year-old EP/LP seemed like a perfect choice for Night Flight.

With a professional camera crew, led by director John Sanborn and director of photography Frazer Bradshaw, The Residents performed the reworked DUCK STAB! ALIVE! music over three days from May 19-21, 2021 at the 25th Street Studio in Oakland, CA. The results, as you can hear and see on the discs of this limited boxed set, are spectacular.