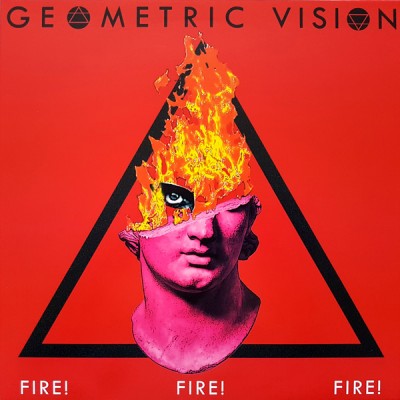 Ready to be shipped in 5 days

Geometric Vision is one of SDN’s absolute top sellers (with Ash Code and Hapax) and their third Album ‘Fire! Fire! Fire!’ (released April 2018) is a continuing success, selling constantly both on CD and Vinyl. Here’s a new, 2nd edition of the CD, featuring the exclusive remix by legendary cult act NO MORE of the Album-track ’79 D.C.’, already included on the VINYL edition of the album (summer 2019). Also the CD re-release comes in the NEW artwork as the Vinyl.

Between esotericism and myth, Geometric Vision show how darkwave sounds at the foot of Mount Vesuvius. The all new album features the previously leaked track ‘Apocalypse Queen’ and also features ‘The Head’ – their latest video and on one track we find a very special guest: Volkan Caner of mighty SHE PAST AWAY.

On FIRE! FIRE! FIRE! Geometric Vision take a new consciousness of themselves and of what is surrounding them, leaving for a while the cold and dreamy dimension of their previous works, to let themselves be enveloped by the flames of a sacred fire... FIRE! FIRE! FIRE! - almost like an alarm, a premonition of misfortune but also a cry of liberation, an attempt to escape from the evil that afflict us enveloped in flames.

The record is a mystical journey between ancestral esotericism and contemporary awkwardness. A symbolic succession of ancient legends, ruins, statues, volcanoes, natural calamities and magic. The scenario is mental but with strong references to the homeland: Naples, Pompeii, the Vesuvius and the Caldera Flegrea - the place where the video of the first single Apocalypse Queen – re- leased in June 2017 was shot - but also the Orient, Latin America, Africa… The visionary cover art was created by the artist Elettra Cuivre who worked with the band for years and also collaborated on the lyrics on this record. There will be also a special guest, Volkan Caner of She Past Away, who will sing on a track.

Geometric Vision formed in Naples in 2012 and is composed of Ago Giordano, Gennaro Campanile and Roberto Amato. The debut album ‘Dream’ was released in 2013 with references to cold wave. Their second album "Virtual Analog Tears" (2005) was characterized by a greater sound research and the vision of the band becomes less geometric and more dystopian. The two albums received generally positive reviews in Italy and abroad and Geometric Vision are inserted in the list of the hottest new post-punk/darkwave contemporary bands.