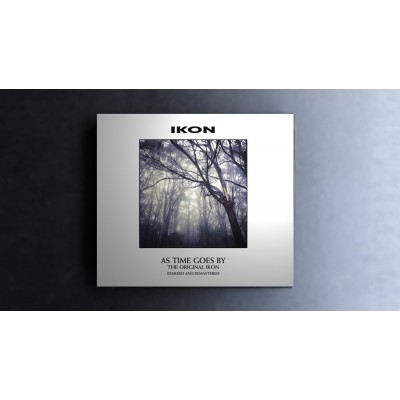 IKON - AS TIME GOES BY [REMIXED AND REMASTERED] DIGI2CD

In January 1992, IKON entered the studio to record what was supposed to be the band`s debut single „As Time Goes By“ b/w „Never Ending“. Over three days from 17 January, a total of 8 songs were recorded and the band was reasonably satisfied with the results. Shortly afterwards, an accident lead tot he partial erasure of the drums for „As Time Goes By“, making it impossible to finish and also wiping the plans for it to be the main single track. The remaining songs were mixed over the following weeks, but the band was not happy with the results overall, so the project was shelved. By mid 1992, IKON decided to attempt to remix the tracks and select another single option, but this time encountered a new problem: the tape was beginning to oxidize, making it impossible to play. The band was faced with the prospect of being forced to use the initial unsatisfactory mixes. In 2016 this original IKON session, known as „As Time Goes By“, was given one final facelift by repairing and cleaning up any tape issues, and presenting the songs in a more natural light. It was decided that no more songs would be added to CD1, not to detract from IKON's studio debut. CD2 contains the complete January 1st Arthouse live show, which has never been released in full. This show was recorded within a couple of weeks of the Frontline session, and is a a fitting addition. For fans of JOY DIVISION , NEW ORDER, DEATH IN JUNE …