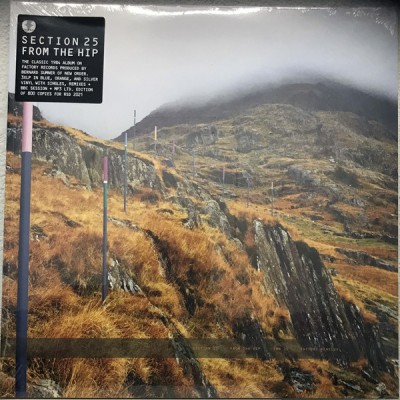 READY TO BE SHIPPED IN 15 DAYS

Factory Benelux presents a limited edition triple vinyl remaster of From the Hip, the pioneering 1984 electro album by cult Factory Records group Section 25, produced by Bernard Sumner of New Order. Pressed on orange, blue and silver vinyl, the set is limited to 800 copies only and housed in a deluxe trifold sleeve reproducing the original iconic cover art by Trevor Key and Peter Saville, which features the cryptic colour-coding favoured by Saville at that time.

Recorded at Rockfield Studio during the summer of 1983, From The Hip was the band’s third album for Factory, and the first to pursue a more accessible musical direction, thanks largely to new members Jenny Cassidy and Angela Flowers joining Larry and Vin Cassidy and Lee Shallcross. It marks the only time that Bernard Sumner agreed to produce an entire album for another artist, falling between the classic New Order albums Power Corruption and Lies and Low-Life.

Adopting state of the art Roland electronics, on From the Hip Section 25 graduated from barbed post-punk to smooth electronic pop, much of which prefigured techno and house styles, and spawned an enduring club/dance hit in the blistering Megamix version of Looking From A Hilltop, remixed for 12” by Sumner and Donald Johnson of A Certain Ratio.

The original 1984 album appears on Disc 1, while Disc 2 features the Megamix version of Hilltop along with a newer 2010 remix by Stephen Morris (also of New Order), and the powerful Sumner/Johnson reboot of early Section classic Dirty Disco. Additional bonus tracks on Discs 2 and 3 include non-album electro singles Beating Heart, Crazy Wisdom, Sakura and Bad News Week, as well as a 1984 BBC radio session and rare track Slinky, performed just once in 1985. Beating Heart is heard here in its 12” form, featuring remarkable Roland TB303 ‘squiggle’ effects which predate acid house by at least two years.

Original Studio Album: A1 The Process A2 Looking From A Hilltop A3 Reflection A4 Prepare To Live B1 Program For Light B2 Desert B3 Beneath The Blade B4 Inspiration