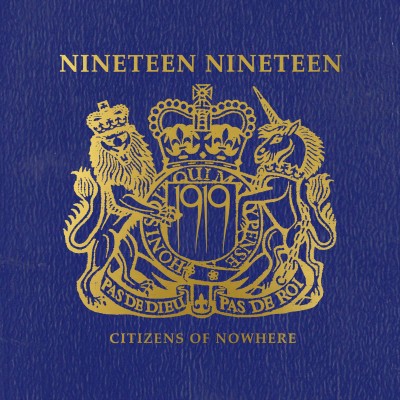 In their early days, 1919 might have been described as playing to the same crowd as Killing Joke, Psychedelic Furs or a host of others categorised as gothrock and were to release only one album, “Machine” (RED RHINO, 1983), before the artists split, to explore other projects. Sputnik (Paul Drake) forming The Hive, as the rest of the band became Another Cinema. Since their re-emergence as 1919, the band released 2 albums: “Bloodline” (Westworld, 2017) and “Futurecide” (Cleopatra, 2019).

This all new album seamlessly slips from its predecessor emerging from the starting gates with “Borders”, a song that is tinged with political intent, from the lyric “…there’s no borders now, keep the aliens out…” almost unpalatable, but no doubt a prod at those in power. Moving further into the album, ‘Feels like forever’ is like revisiting 90s slice indie rock, some- where between Ride and Manic Street Preachers, although this is not copycat, these sounds are totally authentic, a rewriting of history in their own image. ‘Demigod’ continues this journey, as Goldhammer sings “…I’m a god, I’m a godamn demi-demigod…” perhaps something that might’ve worked slightly better in the 80s, but even in Y2K Britain, is maybe an idea that needs a bolt of electricity to rediscover this passionate worship. ‘Only the Good’ follows with the scrunch of musical backing adding to the atmosphere. ‘Singing to the Universe’ emerges from these shadows, as the number has the dark intent of Matt Bellamy singing for his absolution, but like ‘Feels like forever’, they fail to become just another photocopy and produce their own sound.

This really is another quite stunning episode in the life of this band. This is one of the most surprising releases of this year.

TRACKS: 1 Borders 2 TV Love 3 Feels like Forever 4 Demigod A5 Only the Good 5 Singing to the Universe 6 Jackie 7 Sweet Blue Murder 8 A gilded Cage