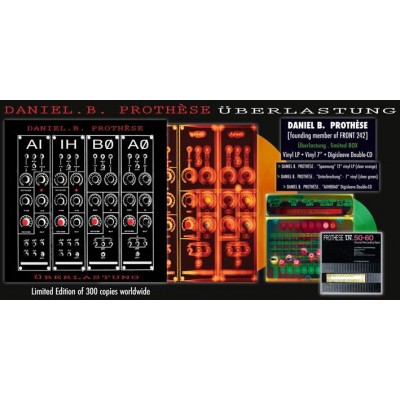 “Überlastung” is released as a deluxe box-set subtitled “AIIHB0A0” and strictly limited to 300 copies worldwide. Included are 2 vinyls (the “Spannung” clear orange colour 12” LP and the “Unterbrechung” clear green colour 7” vinyl) both featuring exclusive material, plus a digi- sleeve double-CD. The music on the CD’s and the vinyls are very complementary and quite different, aptly chosen to best match with the specific playback conditions offered by each medium… For this release-project, DANIEL.B. PROTHESE stands for minimal noise and randomly or lfo's generated rhythmic electronic sound manipulations. Also note that each new release-project by PROTHESE is approached in a totally different fashion, so we can simply expect the unexpected without any particular focus on one specific sound style in the future…