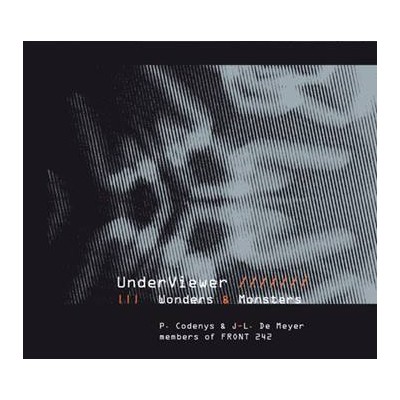 Ready to be shipped in 7 days

The first pressing was a hand-made arty packaging. This edition is fully SOLD OUT. This new pressing is still a Digipak, but is coming with New Artwork. Only the “cover” packaging changes. EVERYTHING else remains the same!

Before joining FRONT 242 in 1981 and devoting several decades to this band, Brussels-based artists Patrick Codenys and Jean-Luc De Meyer used to be working together as a duo since 1978 under the UNDERVIEWER moniker, using a bass, synthesizers, rhythm boxes and a tape recorder… Back then, although machines had their technical limitations and were imposing heavy constraints, the duo were definitely enjoying total freedom of tone and inspiration. From destructured experimental tracks to more melodic and structured songs, UNDERVIEWER always focused their creative approach on minimalistic arrangements way more influenced by German bands like LA DÜSSELDORF, DAF, etc. rather than by English groups.

Dormant for over 30 years, UNDERVIEWER recently recovered a dozen of tracks from their early 4-track tape recordings or even recreated some of them by meticulously reusing the same vintage machines, only slightly adapting them where needed. These songs have now been gathered together to astonishingly form the debut album of a band that has been existing for over 38 years! “Wonders & Monsters” brilliantly renders the force and the timeless and melodic duality of a music which fits everywhere and any time, and never had the pretention to belong to any form of avant-garde…14 songs hanging between fire and ice, carried by the distinctive and matchless voice of Jean-Luc De Meyer, and fuelled by Patrick Codenys’ sharp and modern production style. UNDERVIEWER’s songs have that particular poisonous charm and poppy catchiness that make them instantly addictive and accessible…