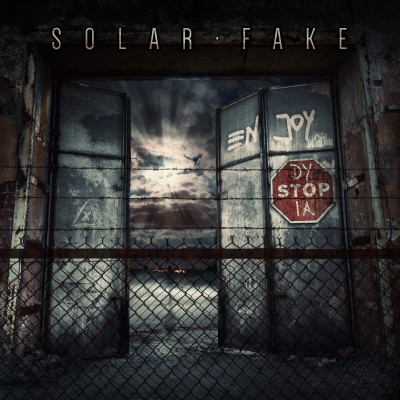 The regular Version of the album features 10 new tracks, including the recent hit-single ‚This Pretty Life‘, that was sold out within 2 weeks.

Three years after the release of "You win. Who cares?", Solar Fake announce their new album "Enjoy Dystopia" - an album that consistently follows the path of its popular predecessor and even takes it several steps further.

Singer Sven Friedrich agrees: „Some of the new songs are more close to "You win. Who cares?", others however are a bit more different. With each new album I always look a little bit beyond the horizon and attempt to bring new elements into the music, but without compromising the Solar Fake sound".

There is a special new element that has a great importance for the sympathetic singer: "For the first time, there is a song with German lyrics on the album. We have never had that before with Solar Fake. I had the chorus lines right in my head when I wrote the song. And somehow, I didn't want to translate it into English, that would have been a compromise and with Solar Fake, I don't make any compromises. Ever."

Strong words, but in fact, the song ‘Es geht dich nichts an’ fits perfectly on the album and shows a previously undiscovered aspect in the Solar Fake sound.

Fans of Solar Fake can look forward to some rage infused melodies and beats: "The album is dominated by aggression, which is sometimes more obvious and sometimes more subtile. Of course, there are also calmer and sorrowful moments. Nevertheless, the ones who do not know where to put their feelings, their aggression, their despair of humankind, their vulnerability to an overall stupidity, will feel understood.”